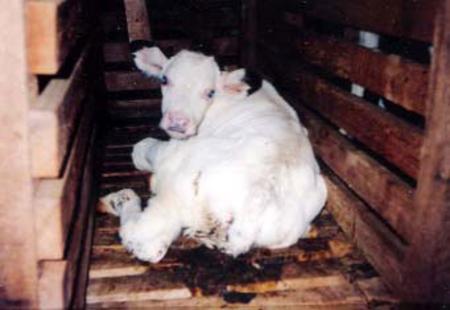 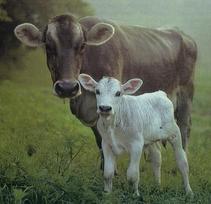 When one thinks of cows, idyllic images of barnyards and rolling grassy hills may spring to mind. Regrettably, such images are mere illusions. Cows are indeed among the few farmed animals allowed to spend time in a “natural” setting. The majority of cows, however, are allowed to graze only for the first six to ten months of their lives. Most cows are slaughtered before they reach the age of two. (Cows living in peace on sanctuaries can live for 16–17 years.) What’s more, with precious few exceptions, these gentle animals are forced to endure pain throughout their lives.

Raising cattle for slaughter constitutes one of the largest industries in the United States. Millions o f cows are killed annually to stock our grocery stores with beef products. Millions more suffer and die in the production of dairy products, leather and byproducts such as gelatin. In Colorado—ranked 10th nationally in cattle production, 2.5 million cows live on range land, open space, feedlots and factory farms. Whereas cows raised for beef in Colorado generally have access to pastures, most spend half their lives on feedlots. Dairy cows generally are kept in intensive confinement on factory farms for the duration of their lives. Cows feel pain, happiness, loneliness and fear, just as we do—and just as our animal companions do. Yet we treat them as if they have no feelings, as if they are not worthy of our compassion. 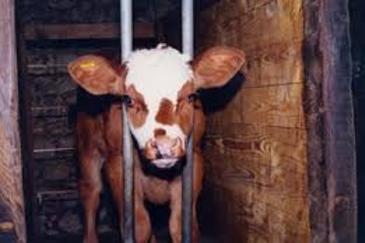 After reaching market weight, cows are packed onto a transport trailer and shipped without food and water to the slaughterhouse. Once there, they are moved off the truck by means of a 9,000-volt prod. If that method fails, they are kicked and pushed or dragged with ropes. During transportation, many cows suffer severe injuries such as bruises, abrasions, broken limbs, and dislocated joints. Some are unable to stand after being transported and must be moved with tractors or forklifts. Factory policy does not allow these “downers” to be euthanized because their bodies still have value. As a result, these animals often endure a slow, agonizing death. 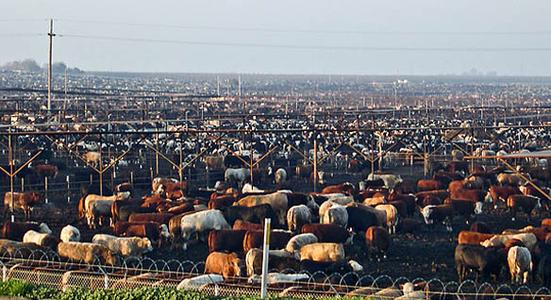 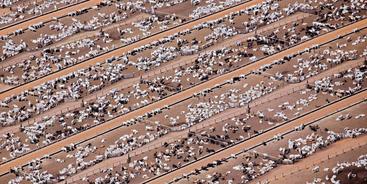 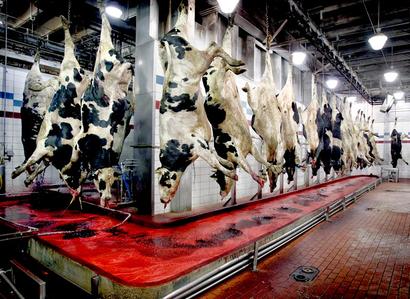 U.S. “dairy” cows are often forced to wear chains around their necks so they don’t stray. Most dairy cows spend their entire lives standing on concrete in huge sheds while being milked constantly. These cows are injected with synthetic growth hormones, which increase the likelihood of them developing udder ligament damage, mastitis and lameness. Though their normal life span exceeds 15 years, the stress caused by factory-farm conditions leads to disease, lameness, lack of milk production, and reproductive problems, rendering the cows worthless to the dairy industry by the time they are four to five years old. Approximately one-third of U.S. dairy cows are slaughtered each year—accounting for 33 percent of total domestic meat production. The corporate milk industry is so abusive that many diary cows become “downers” by the time they enter the slaughterhouse gates. The skins of the slaughtered animals become “leather” and their muscles are used in pot pies and other low-grade products. 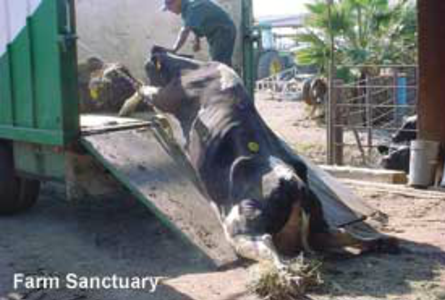 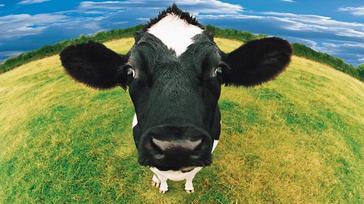 The animals live in these environments for another six to ten months until they reach “market weight,” at which time they are sold to a slaughterhouse. The sooner cows can be sent to slaughter, the quicker a profit can be made.  At the feedlot, the animals are fed a diet of grains, unnaturally rich fillers and growth hormones that cause them to gain weight as rapidly as possible. Forced to live in tiny, waste-filled pens or on muddy, disease-tainted lots with thousands of other animals, a factory-farmed cow lives in constant pain and fear. The animals are injected with drugs and antibiotics to keep them alive in the intensive conditions. Cows are occasionally forced to live in windowless and unventilated buildings where they have no access to fresh air and sunlight. These buildings offer little protection from winter cold and summer heat. The stench of waste and pesticides hangs in the air.

The suffering begins shortly after birth, when cows are branded for identification purposes. Branding involves searing the skin with a scalding iron. Males then are castrated to soften their muscles and to make them easier to control. They are dehorned to limit the injuries they may cause one another in close confinement. Usually both castration and dehorning occur without anesthesia. After a weaning period of about seven months, cows are separated from their mothers and sold to factory farms. They then are transported by truck, sometimes thousands of miles and often through extreme weather, to filthy feedlots or confined animal feeding operations.

The light color of veal is considered a delicacy, fetching high prices despite the gut-wrenching treatment of those gentle animals. To keep their muscles from developing, veal calves are chained by the neck or confined in individual stalls so small that they cannot move freely. Their liquid-based diet causes them to suffer health problems such as ulcers, diarrhea, pneumonia and lameness. Calves endure this life for 18–20 weeks before being slaughtered.

For cows to produce milk, they must be kept pregnant or lactating. Mothers are rarely allowed to nurse their young because we appropriate their milk for human consumption. Because male calves have no role in dairy production, many are slaughtered immediately or sold to producers who raise them for veal, the most notorious byproduct of the dairy industry.

At a standard slaughterhouse, approximately 250 cattle are killed every hour. On the fast-paced assembly line, harried workers rush to meet quotas. Humane treatment is secondary to speed and profit. Cows are shot through the head with an imprecise “captive bolt” gun, then are shackled and hoisted for processing.  Some days, dozens of animals arrive at the cutting stations clearly alive. “They die,” says one factory worker, “piece by piece.” In one instance, a company was cited 22 times for chopping the hooves off of live cows. 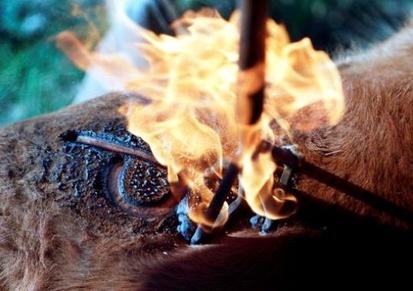 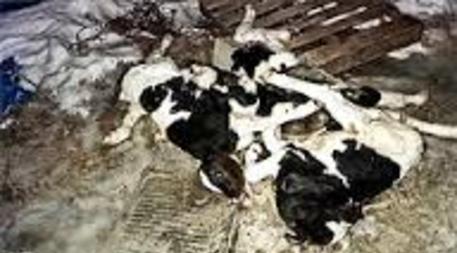 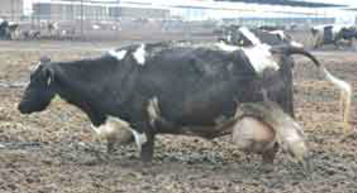 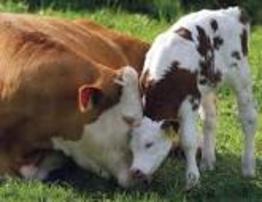 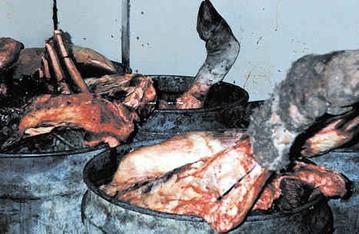 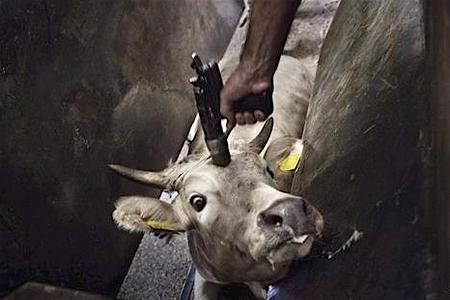