Down is the soft feathers of ducks and geese. Most birds used for down live on factory farms and must endure rough handling throughout their lives, and especially when they have their feathers ripped from their chests during pluckings. A goose may live through four or five pluckings before he or she is slaughtered. When it becomes more expensive to keep the animals than their feathers are worth, the animals are killed.

The majority of down comes from ducks…” – American Down & Feather Council Ducks and geese are not raised solely for their feathers and down though. They are raised and used instead for eggs, meat or foie gras. Purchasing down products directly supports these industries. Although the majority of feathers come from China, they are also “produced” in Hungary, Poland, Turkey, the European Union and the U.S. Note that much like the link between veal (juvenile) calves and the dairy industry, there is a strong link between foie gras (fatty liver from force fed ducks and geese) and the down/body feathers used in household items.
There are technically three methods used to remove down and body feathers: Post mortem, gathering and live plucking.

1. Post mortem (after slaughter):
For this method, feathers are removed from the birds’ bodies after they are killed for their flesh and/or internal organs (foie gras). The process usually involves scalding the birds’ bodies in hot water for one to three minutes so the feathers are easier to pull out. The body feathers can then be plucked (often by hand), after which the down is removed by hand or machine.
2. Live Plucking
Live plucking is exactly what it sounds like: a goose or duck is held down by their neck or wings as the “targeted feathers” are torn from their skin. When the skin rips during this process it is sewn up with a straight needle (no analgesic or sterilization used) and the bird is left to recover before the next “harvest of feathers.” This process is repeated every 6-7 weeks before the bird’s eventual slaughter (or death from the trauma of the plucking process itself). he ducks and geese struggled against their captors, honking and squawking throughout the plucking. After their chest was stripped of feathers, the birds are simply tossed to the floor where they struggled to stumble away, some with freshly sewn skin.
3.  Gathering (live birds):
“Gathering feathers from live geese [or ducks] is defined as removing feathers that are ripe due to the phenomenon of molting and would refer to using a brushing or combing action to remove feathers or down which are ready to fall out.”

Synthetic alternatives to down are cheaper and perform better at blocking the cold than feathers. When wet, down becomes waterlogged and fails to insulate and remain comfortable. Make sure to avoid down when buying jackets, comforters, sleeping bags, and pillows. Alternatives are readily available. 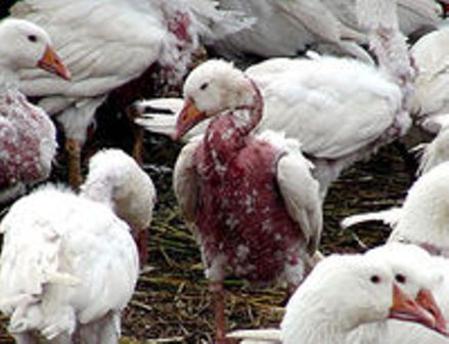 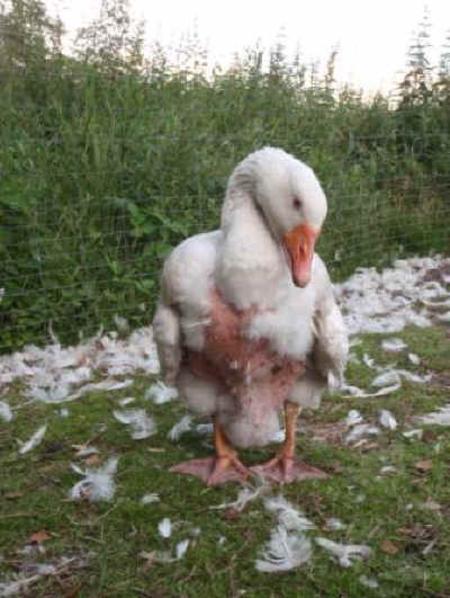