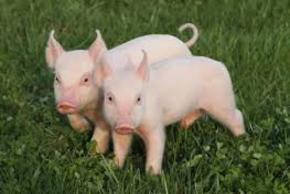 Studies have shown that the intelligence of pigs matches or exceeds that of dogs. Like dogs, pigs are friendly, gregarious and full of personality. We would never think of eating our dogs. Yet every year 100 million pigs are slaughtered for food in the United States. 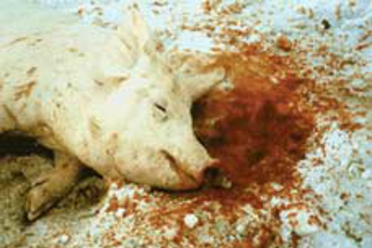 Pigs display many human emotions as they are slaughtered—they tremble and cry out in fear—just as we would. In accordance with the federal Humane Slaughter Act, pigs are to be stunned before killing to render them unconscious. This is most often accomplished with a captive bolt pistol, which fires a steel pin into the pig’s brain, or a head clamp that delivers an “electrical stimulation.” The animals then are hung upside down by one leg. They are pierced in the neck or their throat is partially slit so the blood drains out of their bodies. Because the captive bolt pistols do not always do their job—remember, speed equals profit, and speed equals errors—pigs may still be fully conscious during this bloodletting. The pigs are then maneuvered to the scalding station where they are dunked in water so hot it burns the hair and factory filth from their bodies and softens their skin for butchering. 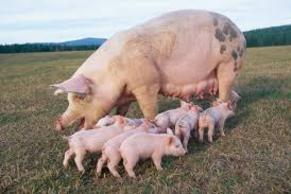 The vast majority of pigs are raised on factory farms, where there is no freedom, fresh air or sunshine. On factory farms, sows are forced to give birth to approximately 20 pigs a year. Placed in a restraining device commonly known as a “rape rack” by factory farmers, sows are artificially inseminated at 6–8 months of age. They are then confined to gestation crates. These metal pens are between 18 and 24 inches wide. The pigs are secured so that they cannot turn around and barely have enough room to lie down. This arrangement maximizes the use of space. The sow is then placed in a tiny farrowing crate to “raise” her young. A sow’s contact with her babies is hindered by the crate’s metal bars. This industry practice maximizes profits by preventing sows from crushing their babies, which can happen in such close confines. 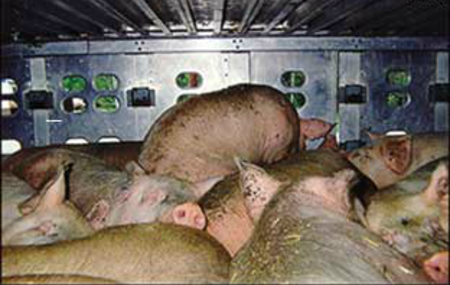 The piglets will spend the rest of their lives in metal cages on concrete floors in dark, windowless sheds. The cages are designed so the pigs cannot move around and can barely turn their heads. Living in urine and feces, the pigs may develop severe and often fatal respiratory problems. Genetically manipulated and fed a steady diet of growth-inducing hormones and drugs, factory-farmed pigs weigh 250 pounds by the time they are six months old. At this weight, they cannot walk normally. While free pigs pass most of their time wandering around and rooting for food, factory-farmed pigs can barely stand up or walk. Normally, a pig’s lifespan is about 15 years, but a factory-farmed pig is slaughtered after six months—six months of confinement, abuse and severe stress. A 2006 industry report states that nearly one million pigs die each year from transportation alone. It has been reported that some pigs, when transported to slaughter on cold winter days, actually freeze to the sides of trucks, sometimes leaving chunks of flesh behind. 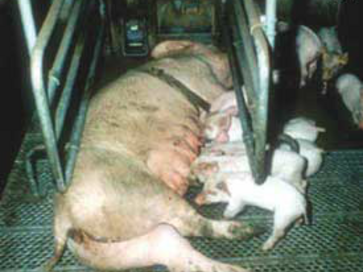 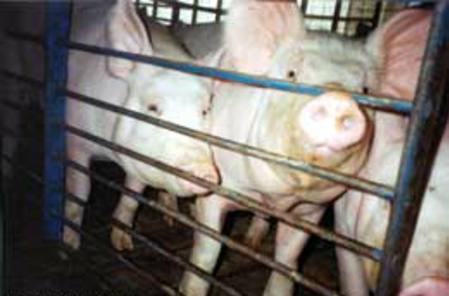 Three weeks later, the piglets are torn from their mother to begin their own lives of confinement and pain. This brutal life is sustained for 3–4 years, during which time the sow will remain continually pregnant. When the mother pig is spent—which is to say that she is no longer efficient in her reproduction—she is sent to slaughter. Almost all of the pigs’ natural activities are subverted by the confinement of a factory farm. As a result of extreme anxiety and trauma, lack of movement and being denied bedding or straw on which to rest, sows are in emotional and physical crisis; they chew the bars of their cages and cry out for the babies who were taken from them. To prepare newborn piglets for a lifetime of confinement, factory farmers first cut off their tails and clip their teeth. Boars’ snouts are sometimes bashed so the open wounds discourage fighting. These procedures are done to minimize the damage the pigs may inflict on one another or themselves under the stressful conditions. Next, a pig’s ear is “notched” to aid in identification. And then the male pigs are castrated. Each of these mutilating procedures is performed without painkillers. 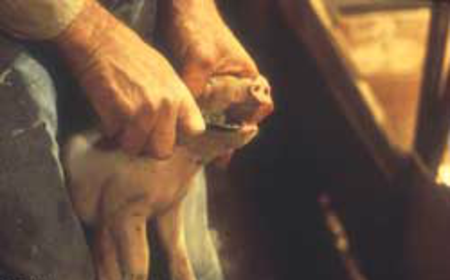 Go Back
View on Mobile