Speaking Out
What Experts and Celebrities are Saying about Rodeo

"You don't have to be an animal rights activist to see how these rodeos hurt the animals. It isn't a matter of perspective or opinion – animal suffering, injuries and death are all part​ of rodeos."
~Rikki Rockett, drummer and cofounder of Poison

"Do I think it hurts the calf? Sure I do. I'm not stupid."
~Keith Martin, Chairman of the Professional Rodeo Cowboys Association (PRCA),
in an interview about the abusive calf roping event

"I do not torture animals, and I do not support the torture of animals, such as that which goes on at rodeos: cowardly men in big hats abusing simple beasts in a fruitless search for manhood."
~George Carlin

"Without torture, there can be no rodeos. In my opinion, and based on my extensive training and experience, it is impossible to create a humane rodeo."
~Peggy W. Larson, DVM, large animal veterinarian and former bronc rider

"Kindness and compassion towards all living beings is a mark of a civilized society. Racism, economic deprival, dog fighting and cock fighting, bullfighting and rodeos are all cut from the same defective fabric: violence.
~Cesar Chavez, civil rights leader, founder of the United Farm Workers

"I don't think enough people stand up for animals. My heart goes out to them because, to me, every single animal has a heart and a mind and a soul."
~ Carrie Underwood, in an interview with Reader’s Digest

"In order for a calf roper to become proficient he must spend a great deal of time practicing. Baby calves sold to the practice pens are roped over and over until they are injured or killed."
~Peggy W. Larson, DVM, MS, JD

Rodeos exist on the pain and suffering of animals, and the
animals' desire to escape. Thanks to SHARK for the videos. 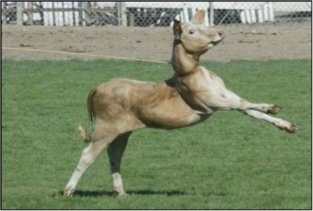 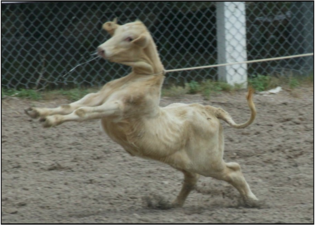 Rodeo Reality What this industry won’t tell you

Anyone with a heart knows it's wrong to clothesline a baby animal, body slam him to the ground, tie his legs so he can’t move, and drag him by the neck. If this were done to a puppy or kitten, the offender would understandably be charged with a crime, and likely be jailed. In rodeos, however, it's called calf roping, and supporters claim it’s a sport. But the abuse of baby cows is just one of rodeo’s cruelties. Rodeos maim, injure and kill untold numbers of animals every year. Rodeo associations, such as the Professional Rodeo Cowboys Association (PRCA) and International Professional Rodeo Association (IPRA), refuse to release injury and death reports, or the record of violations of their
so called “humane rules”. The rodeo industry relies on baseless surveys from nameless,
undated, mystery rodeos to propagate outrageously inaccurate animal injury rates.
​

Research has repeatedly proved the Professional Rodeo Cowboys Association’s (PCRA) public statistics to be utter nonsense. Even contestants themselves know how high the injury rates really are says T.K. Hardy, a calf roper and veterinarian to Newsweek, “I keep 30 head of cattle around for practice, at $200 a head. You can cripple three or four in an afternoon. So it gets to be a pretty expensive hobby.” In over 20 cities and states the majority of Americans have said “No” to rodeo cruelty by either banning or restricting events. For years, SHARK has documented and exposed violations of rodeo’s “humane rules” and state cruelty laws from coast to coast.

Steer Busting is the very worst PRCA event, with dead and severely injured steers being dragged out of virtually every rodeo. Given the horrific brutality of the event, it is a wonder that any of them survive. Steer busting is the event that single-handedly belies the claim that rodeo people care about animals.

Calf Roping is also extremely cruel and causes many injuries and deaths. Additionally, abusing an animal that is only three to four months of age is an especially cowardly act.
Team Roping involves two contestants roping the head and rear legs of a steer and then pulling in opposing directions. Needless to say, this also results in many animal injuries.

Steer Wrestling was never part of ranch work. It is trivial, utterly pointless entertainment and nothing more. Steers often have their tails twisted and raked over fences to make them run out of the chutes. Once out, their necks are violently twisted, which can cause injury and death.

Bucking horses in the Old West were untamed horses who didn't need inducement to buck – they were wild. Today's bucking horses are tame, domesticated animals who are mistreated to artificially induce a "wild" appearance. They need to be tame because they spend half of their life riding around in trailers. So to trick rodeo fans, the PRCA rules require the use of a strap around their flank area that causes them to buck in a furious attempt to rid themselves of the device. PRCA rules also require that contestants constantly spur the horses during the event. However, when the "ride" is over, these same animals are gentle and non-aggressive.
Bull Riding was never a part of ranch work nor was it a mode of transportation.
Like Steer Wrestling, Bull Riding is pointless, trivial entertainment and nothing more. Like bucking horses, bulls are subjected to flank straps (also known as buck straps) and constant spurring. Bulls are also subjected to other forms of mistreatment, most notably the use of electric shock to make them appear wild. Note that like the horses used in bucking events, bulls only buck and act wild while the various torments are applied. Before and after the torment, these animals are perfectly docile.