Anyone who has lived in Colorado or other parts of the Southwestern United States for long is probably familiar with water shortages. In efforts save water during a drought, many parts of Colorado put water restrictions into effect. These restrictions often prohibited “using hoses to wash paved areas, limits on car washing and filling or refilling swimming pools, and restrictions on planting and/or watering new sod.” During recent years parts of Southern California have asked citizens “not to wash their cars… and to use low-flow showers and toilets.” Some Coloradans might remember suggestions that people shower for just one minute less each day in order to save water or when many restaurants only served glasses of water upon request. However, most people probably haven’t heard that to produce one pound of beef between 441 gallons of water (National Cattleman’s Beef Association estimate) and 5,214 gallons of water      (University of California Agricultural Extension estimate) are needed. Even using the NCBA’s estimate, more water is needed to produce one pound of beef than is needed to provide water for a seven minute shower each day for a month with a 2 gallon per minute flow rate shower head.

While there is some disagreement over how much water is needed to produce beef, one thing cannot be disputed: even by the most conservative estimates it takes far more water to produce a pound of beef than a pound of even the most water consuming fruits or vegetables. However, beef is not the only food requiring large amounts of water; other meats, such as chicken and pork, also take require more water than equivalent amounts of plant based foods. This is largely because the amount of grain eaten by an animal is larger than the amount of meat produced by that animal. Currently, around eighty percent of American grain is used solely for animal feed. In Colorado, 25% of water goes to alfalfa crops. Crops used to feed farm animals need water just like any other crops, but they are not producing nearly as much food for humans as crops raised for direct human consumption. Thus, meat consumption becomes a rather inefficient use of water.

Meat production doesn’t only use up water; it also contributes greatly to water pollution. In Colorado alone 19 million tons of cattle waste is pro duced each year. Feedlots often place animal waste in “lagoons” due to the extremely high costs of other solutions, such as using a portion of it as natural fertilizer. This leads to pollution in a couple of ways. First, if no natural fertilizer is being used, then chemical fertilizer must be sprayed onto crops. These fertilizers are often washed away by rain, polluting nearby water supplies. Second, piles and “lagoons” of animal waste sometimes spill or wash away polluting water.

When a North Carolina hog farm spilled 25 million gallons of waste into a nearby river, causing an outbreak of an organism known as the Pfiesteria piscicida , 10 to 14 million fish were killed. Fisherman, as well as people using the river for recreational purposes, began to develop sores and other strange symptoms after contact with the Pfiesteria infested water.

Water pollution is also caused by cattle that are allowed to graze on natural growth in the American West. Allowing cattle to graze in a more natural environment seems to eliminate the problems of having to grow crops for feed as well as the problem of what to do with their waste. However, cattle are native to moist riparian areas, not the arid climates of the American West where they are so often put out to graze. And cattle seem to prefer areas more similar to their native environment: a study in Eastern Oregon showed that cattle greatly preferred streamside vegetation over other grazing areas. Cattle eat the streamside plants and break down the ground near streams, causing erosion of dirt into the streams. This can often cause water to flow more slowly, increasing the opportunity for bacteria and algal to grow.


Additionally, cattle pollute natural waterways by depositing unnatural amounts of fecal matter and urine into streams (not to mention the occasional carcass left to rot by ranchers who may not check their cattle for weeks at a time). Not eating meat may not have as much on an immediate effect on the water supply as other conservation methods, but the long term effects of reduced meat production could be phenomenal. With important water sources such as the Ogallala aquifer, which provides water to several Midwestern and Western states (including Colorado), shrinking away, long-term water conservation is something that every citizen must take seriously. Few, if any, methods of conservation could save as much water over time as simply reducing one’s meat intake. 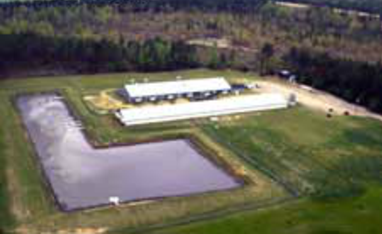 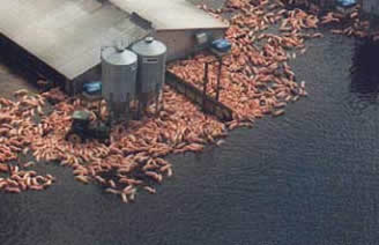 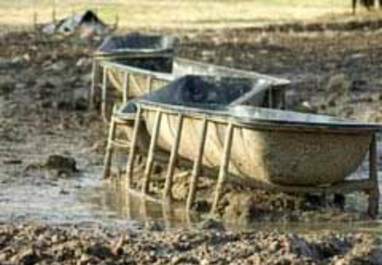 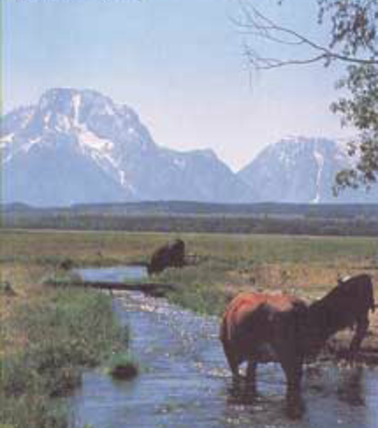 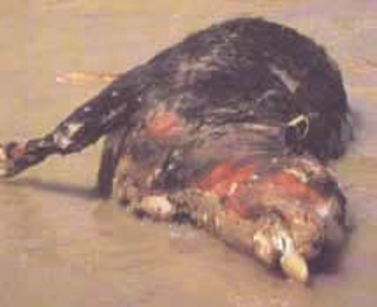 According to a study at Cornell University, Animal agriculture is a leading consumer of water resources in the United States. Grain-fed beef produc-tion takes 100,000 liters of water for every kilogram of food. Raising broil-er chickens takes 3,500 liters of water to make a kilogram of meat. In comparison, soybean production uses 2,000 liters for kilogram of food pro-duced; rice, 1,912; wheat, 900; and potatoes, 500 liters. Water shortages already are severe in the Western and Southern United States and the situation is quickly becoming worse because of a rapidly growing U.S. pop-ulation that requires more water for all of its needs, especially agriculture. Thus meat consumption becomes a rather inefficient use of water. Meat production doesn’t only use up water; it also contributes greatly to water pollution. It takes far more water to produce a pound of beef than a pound of even the most water consuming fruits or veggies. When a North Caroli-na hog farm spilled 25 million gallons of waste into a nearby river, causing an outbreak of an organism known as the Pfiesteria piscicida , 10 to 14 million fish were killed. Fisherman, as well as people using the river for recreational purposes, began to develop sores and other strange symp-toms after contact with the Pfiesteria infested water. Additionally, cattle pollute natural waterways by depositing unnatural amounts of fecal matter and urine into streams. 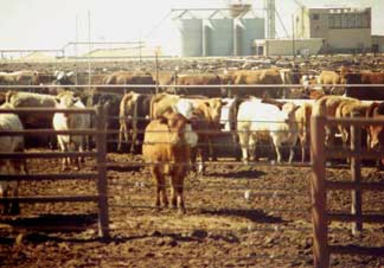